Who is Herman Van Rompuy? 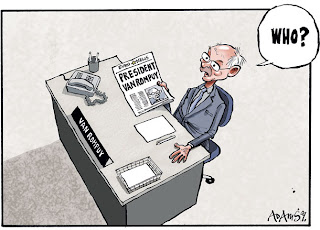 How many of you reading this blog have ever heard of Herman Van Rompuy? Unless you happen to be a fan of Nigel Farage's colourful speeches on Youtube, I very much doubt that more than a 2 or 3% of you have ever heard of him. Not a big deal you may say, yet this man is in charge of the European commission that now set 60% of Britain's laws and Van Rompuy has complete control over the legislation entered into the house. What this means is that unless you and Van Rompuy share similar beliefs none of the policies you voted for will be implemented.

To make matters worse he is an unelected bureaucrat and the people of Europe have no means to remove him should they deem him not fit for purpose. Even more shockingly this man claims he shares the same political legitimacy as the Prime Ministers of Europe, despite the fact that nobody for outside Belgium has ever voted for him. This is how dictatorship's start, it is unlimited power without responsibility and were the people don't have the power to remove him. I must warn you do not under estimate this man, he plays a bigger role in how Britain is run than David Cameron. This unelected pen pusher gets to sit at the G8 summit and play a part in discussing how the biggest economy's in world are run, to make matters worse the EU are the only representative at the summit that get to send two people and the second person is also unelected. The EU stand out at the g8 because they are the only representatives there who haven't been elected by the people, even Russia elect there own leaders so why should the EU get not one but two seats despite not even being a nation? The role of Mr Van Rompuy and the other top jobs within the union are extremely vague, this means that nobody really knows whose doing what and who is in charge, this is hardly the best environment to create economic stability. People laugh at Shebby Singh because nobody, including himself seems to know what his responsibilities are at Blackburn Rovers but Van Rompuy is running Europe and is in a similar vote. So the Van Rompuy has apower without limit, so it wont come as a surprise that he is paid just short of £300 000 per year plus expenses from your taxes. Since this is such a short and quickly put together entry I am going to leave you with Nigel Farage welcoming Van Rompuy into his post.